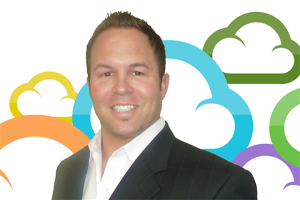 Randy Jeter, CEO and Co-Founder of RapidScale, is changing the landscape of the cloud computing industry through his approach to delivering Business Applications as a Service to VARs, MSOs, MSPs, Carriers, Application Consultants, Agents and IT Consultants. Randy was proud to speak about the development of the company, which was launched in late 2008 with a focus on consulting IT services. Randy saw an opportunity to get into the cloud computing space as an early entrance and launched in 2010. That same year Randy and Co-Founder, William Hiatt, launched their first cloud facility in Irvine, CA.

Randy has always had a love for sports, outdoor activities and fitness along with a passion for technology. After moving to Orange County on a baseball scholarship, he pursued a career in Personal Training having earned multiple Personal Training certifications before moving on to training high net-worth clients at their homes, beach and a local gym. In his interaction with one of his clients, Raymond DeAngelo, now Vice President of the Board for Commerce West Bank, it was suggested that he get into technology as there was a higher earning capability than in fitness. Mr. De Angelo then went on to introduce Randy to leadership at a leading telecommunications company that ended up hiring him. It was through this opportunity that Randy got into technology and started thinking about how to create a fitness system that connected fitness programs, exercise equipment and client interaction in a platform that could successfully manage people’s fitness programs. This platform is something Randy looked into patenting as he felt this would be the way of the future. In joking, he believes it will be the way of the future, it just wasn’t in 2005 and 2006. Thanks to this experience, Randy was able to realize the power of market timing, vision and market positioning, which has played a huge part in the growth and strategic positioning of RapidScale.

With the growth of the cloud computing industry, how do you see RapidScale growing in the future with employees, number of locations, potentially outsourcing, etc?

I see the growth of the cloud computing industry tripling in buyers in the coming years. RapidScale is currently headquartered in Irvine, California, but has a presence across the United States. We also have data centers in California, Virginia and Texas. I believe that the best talent from within IT teams will be shifting to the cloud and more focus will be put into cloud delivery and automation. The net value of cloud services to business is continually getting better year over year and this can be seen in higher net ROI’s to businesses of all sizes.

Gartner estimates that, over the course of the next five years, enterprises will spend $112 billion cumulatively on software, platform, and infrastructure as a service. Do you feel that RapidScale will experience the same growth projections as more businesses collaborate with the cloud industry?

I believe that the cloud industry will have a large growth spurt over the next 3 to 5 years, resulting in an increase in businesses utilizing RapidScale’s services. As RapidScale further expands its services into delivering a Business Applications as a Service platform and automates its platform, it will rapidly expand. The collaboration of software, platform, and infrastructure as a service allows easy access for all businesses that convert their informatics to the cloud as the cloud is about delivering applications and storing information. The current focus on cloud computing is the delivery and management of servers, storage, routing, switching and global performance. Once global cloud platforms like RapidScale’s are built and automated, the compute becomes less of a concern and the focus shifts to Business Applications as a Service.

Where are you hoping to see RapidScale’s largest upcoming successes in the next few years?

I see large upcoming successes occurring in 2016 and 2017 with RapidScale’s partnership with MSOs and Global Carriers. Carriers and MSOs (Cable Companies) have the largest subset of individual users, allowing cloud computing to be in many homes and businesses. This pushes RapidScale’s services from the business space to the consumer space as well. The delivery of the virtual personal computer will be via the TV along with all the other devices people use today. The level of opportunity this presents and innovative solutions that are being developed by RapidScale and its partners will make what today is not a reality a reality at a very affordable cost. This is why Randy believes RapidScale has the capability to triple revenue year over year after the key partners launch to market in 2016.

Who are your main targets for cloud computing? Has RapidScale reached out to colleges to target college administrative staff and its students to expand its users?

In addition to working with multisystem operating businesses and expanding toward individuals, RapidScale also collaborates with educational institutions. It provides affordable, low-cost computing solutions for students and will be expanding this vertical approach in 2016. The cost of a Managed Virtual Personal Computer is easily incorporated within students’ tuitions and allows them to access their books and tools, and store their data from any workspace. The key factor to the success of the vertical approach is “Managed” as students want the technology to work and having support means the elimination of computer issues that cause an inability to work. This convenience illustrates that cloud computing is not only for businesses, but it can also be used for individuals.

In what ways are you hoping investments made in RapidScale will help the company?

The investments to date have been made by very senior investors alongside the other Co-Founder, William Hiatt, and myself. The current investment group includes: the former President of Sprint Wholesale, former COO of Terremark, former President of Ariba Networks, Managing Partners for two leading Venture Capital firms, and an early investor and longtime board member of a large telecommunications company. When it comes to taking money, the opportunity and rate of the return has to be there as investors have time tables for their investments along with goals. So, after taking the first round of capital we have taken on only one additional investor. Many people think we are crazy, but in this day and age people take too much too quick and failure then becomes eminent. My sole focus is to stay in business and build a great foundation so that future investors can see immediate returns on their investments. In our next raise, which we expect to take to market in early 2016, we will raise enough money to properly capitalize the business for explosive growth with the MSOs and Carriers we have developed partnerships with. We will use the capital raised to acquire businesses that are in our space and either have software solutions that allow us to add IP to our platform and lower costs, or purchase companies with a high level of IT talent and revenue needed. Why? In order to stay ahead of smaller regional players trying to compete on a global scale you must grow with large amounts of capital when the market is ready. Too early to market, and you will fail, which is unfortunately what you are already starting to see happen.

Where does RapidScale fall in comparison to competing cloud services?

RapidScale is one of the few cloud computing companies with a Business Application focus. What this means is we are in the cloud computing space to perfect the delivery and automation of applications globally. Today, people think VDI or Virtual Desktop is bad unless they have IT teams that manage and oversee the delivery of the applications. This is a high cost and is rarely something IT teams do unless they have to. What we are focused on is being that Managed Cloud partner that runs, manages and supports the VDI platform, or as we call it, Desktop as a Service platform. For us, we have two very different approaches to this which have landed us the partnerships we have. The first is Managed CloudDesktop, which is an Enterprise platform, and the second is CloudOffice, which is an SMB platform. They are very different and are not standard at-market solutions, which is why we are seen as a leader. We have also partnered with leaders in this space to innovate and over the coming years that innovation will be what makes RapidScale great, along with its “We Care” service approach. Knowing that we innovate is what makes us great, not just delivering a service. This is key to longevity in this space as price compression will kill standalone cloud computing service providers.

Securing information and data loss have always been a concern in cloud computing. How does RapidScale reassure its customers about the safety and accuracy of the information stored? Are there any security measures that are taken in order to avoid data corruption?

RapidScale’s CTO, William Hiatt, had security clearance for a virtualization project that he worked on for the DOD. This knowledge, his background in consulting for some of the largest US-based companies, and his complete understanding of systems has been very important in this area. While no one company is safe (“hacking into the government” should be an example of that) our soon-to-be-announced partnership with a Security as a Service solution, which is being launched to market by one of our investors, will help set us apart from our competition. The key here is: are we better than the competition, and what are we doing both short-term and long-term as we grow to better protect our clients information? What I can say is what we are doing today has gotten an immense amount of praise from security experts in the cloud computing space. What we will add to it with the launch of Security as a Service is powerful and game changing. It comes down to staying ahead of security and providing the best, or failing.

TLA enables technology sales and IT professionals with training and resources, including a new Desktop as a Service sales certification.   IRVINE, Calif. – Nov. 21, 2019 – RapidScale, a Cox Business company, today announced the launch of Technology Leadership Academy (TLA), a self-paced online learning center with video-based training for sales and cloud professionals. The ...