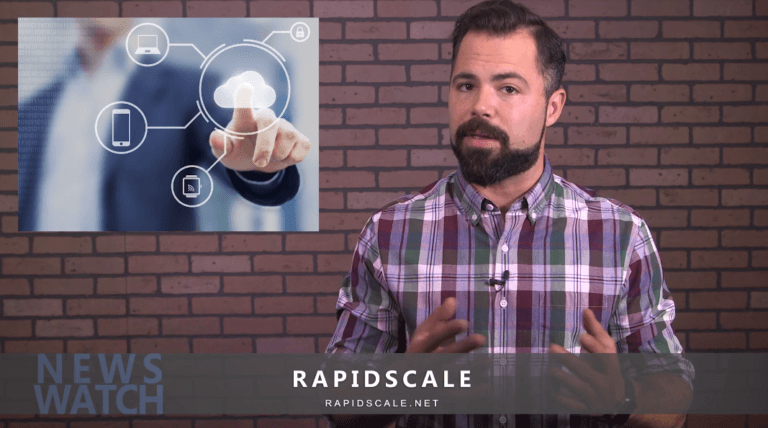 [IRVINE, CA: November 30, 2017] RapidScale, a leader in managed cloud services, was recently featured in an episode of NewsWatch, a national source for technology news and reviews that airs bi-weekly on AMC Network and weekly on ION Network. The 30-minute episode aired on Monday, November 27, 2017 at 7:30 a.m. EST/PST on AMC Network.

“This feature is a testament to our managed and hybrid managed cloud services and state-of-the-art global cloud platform. It speaks to our market position and the overall market pivot to the managed cloud approach,” says RapidScale Co-Founder and CEO Randy Jeter. “NewsWatch reached out to us for this piece because they saw some of the RapidScale news we’ve released recently. A lot of exciting things have happened this year for the company and we’ve had a lot to share, and this adds to those accomplishments.”

Monday’s NewsWatch introduced RapidScale’s managed cloud approach and leading solutions like CloudDesktop (Desktop as a Service), CloudRecovery (Disaster Recovery as a Service) and CloudSecurity (Security as a Service). NewsWatch co-host Andrew Tropeano conducted the review and shared some of RapidScale’s core differentiators with viewers, including:

This feature adds to RapidScale’s list of awards and recognition over the past year, including 50 Best Workplaces of the Year 2017, 2017 CRN Next-Gen 250 list, 2016 Citrix Top Innovator for Enablement and Growth, and 2017 High Tech Innovation Awards finalist.

The RapidScale segment can be viewed here: https://newswatchtv.com/2017/11/22/rapidscale-newswatch-review/

The full November 27 NewsWatch episode can be viewed here: https://newswatchtv.com/newswatch/recent-episodes/

RapidScale, a managed cloud services provider, delivers world-class, secure, and reliable cloud computing solutions to companies of all sizes across the globe. Its state-of-the-art managed CloudDesktop platform and market-leading cloud solutions are the reasons why RapidScale is the provider of choice for leading MSOs, VARs, MSPs, Carriers and Master Agents throughout the United States. RapidScale is not only delivering a service but also innovating advanced solutions and applications for the cloud computing space. RapidScale’s innovative solutions include CloudServer, CloudDesktop, CloudOffice, CloudRecovery, CloudApps, and more. For more information on RapidScale, visit www.rapidscale.net

TLA enables technology sales and IT professionals with training and resources, including a new Desktop as a Service sales certification.   IRVINE, Calif. – Nov. 21, 2019 – RapidScale, a Cox Business company, today announced the launch of Technology Leadership Academy (TLA), a self-paced online learning center with video-based training for sales and cloud professionals. The ...