What is Net Promoter Score (NPS)?

NPS measures a customer’s willingness to recommend a company and gauges customer satisfaction and loyalty.* The metric is calculated by customers responding to the question “On a scale of 1-10, how likely is it that you would recommend us to a friend or colleague?”

Where Did NPS Come From?

NPS was introduced in 2003 by Fred Reichheld and Bain & Company, Inc., who were driven to find a new approach to the traditional customer satisfaction survey. They tested multiple questions in multiple industries and found that the one to the left correlated most strongly with customer behavior.

Why Is NPS Used?

NPS is popular for measuring customer satisfaction and overall brand loyalty due to its simplicity, ease of use, versatility, and widespread adoption. Nearly two-thirds of the Fortune 1000 use NPS. (*Bain & Company)

How does scoring work?

Based on a customer’s response to the survey question, they are placed into one of three categories:

The NPS is calculated using the following equation:

NPS Score = % of Promoters – % of Detractors

This generates a score ranging from -100 to 100, which is the Net Promoter Score. Average scores vary immensely by industry, as shown in the image to the right, but in general, an NPS above 0 is “good”, above 50 is “excellent” and above 70 is “world-class”. (Inc. Magazine) 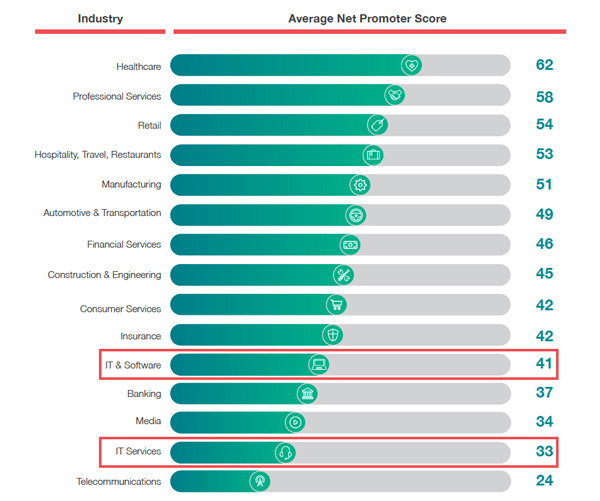 Upon closure of every support ticket, RapidScale’s third-party tool automatically sends out client experience surveys, populating the results with no human intervention. Our customers are first asked to assign a score from 1 to 10, consistent with the NPS process.

RapidScale’s survey participants also rate the Cloud Support Engineer they interacted with, with the option to provide additional feedback.